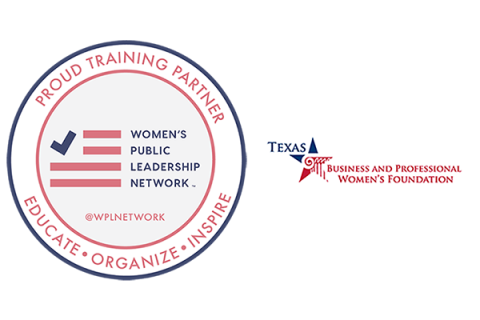 Secretary Esperanza "Hope" Andrade served as Texas's 107th secretary of state, Texas workforce commissioner and Texas Department of Transportation commissioner. She has been a successful entrepreneur, business leader and government official in the state of Texas for more than three decades. As an entrepreneur she has created, grown and sold three high-growth companies, Andrade brings a broad business perspective with particular expertise in health care, transportation, workforce and economic development.

Nancy Bocskor is the director of the Center for Women in Politics and Public Policy at Texas Woman's University. The author of Go Fish: How to Catch (and Keep) Contributors: A Practical Guide to Fundraising, she is an adjunct professor at George Washington University's Graduate School of Political Management, where she taught both online and in-class fundraising courses. She is on the board for Running Start, an organization that encourages young women to run for office, and is an adviser for Veterans Campaign, a program that encourages veterans to enter public service. She recently joined the board of the Lone Star Parity Project in Texas. She also served on the board of the Women's Campaign School at Yale for seven years, where she spent five years as chair of the school's curriculum committee. @nancybocskor

Rosalyn Kumar joined Abbott as a senior director of federal government affairs in 2020. Previously she spent more than a decade on Capitol Hill working for members of the U.S. House and Senate. She also worked for the House Appropriations, Budget, Education and Labor, Judiciary, and Rules Committees, as well as the Senate Finance Committee. Kumar worked in the personal offices of Reps. Debbie Wasserman Schultz (D-FL), Mark Pocan (D-WI), Jared Polis (D-CO), and Sen. Debbie Stabenow (D-MI). She is a native Texan who earned her undergraduate degrees from Southern Methodist University and studied law in the U.K. @rosalynkumar

Jane Macon is a partner at Bracewell LLP. She made history in the city of San Antonio when she became the first woman to serve as city attorney from 1977 to 1983. In 2000, she was appointed by President Bill Clinton to serve on the Selective Service Appeal Board. Macon currently serves as chair of Siebert Financial Corporation (Nasdaq: SIEB). @BracewellLaw

Mayor Nelda Martinez broke historical barriers in Corpus Christi, Texas, in 2012 as the city's first Hispanic woman to be elected mayor. Mayor Martinez served as a national co-chair for Mayor Pete Buttigieg's 2020 presidential campaign. She serves and has served on numerous boards including the Texas Municipal League, KEDT Public Television, the Girl Scouts of South Texas, Foster Angels of South Texas and the Corpus Christi Regional Economic Development Corporation. Martinez earned a bachelor's degree in government from the University of Texas at Austin. @NeldaMartinez_

Justice Rebeca Martinez is a justice on the Texas 4th Court of Appeals, elected on Nov. 6, 2012. She is a sustaining life fellow of the Texas Bar Foundation and the San Antonio Bar Foundation, and has served on the board of the National Association of Women Judges, on the curriculum committee for the Texas Center for the Judiciary, and on the Mexican American Bar Association, among others. Martinez graduated from Southern Methodist University and earned her law degree from the Boston University School of Law. @Rebeca4Judge12

Mia Garza McCord is the president of the Texas Conservative Coalition Research Institute (TCCRI) — the organization's first Hispanic and its first woman to serve in this capacity. A South Texas native, McCord began her work in Texas government and politics after graduating from The University of Texas at Austin in December 2004. She is on the board of directors for Red State Women, is the past president and founding member of Capitol Republican Women and was a 2018 woman of the year candidate for the Leukemia and Lymphoma Society. She and her husband, John, live in Leander with their two children, John Mark and Estela, and are active members of Lake Hills Church.

Dr. Nan McRaven is a former vice president of Motorola and has served on the Austin Community College District Board of Trustees since 2002. She earned her master's degree in public affairs from the LBJ School of Public Affairs and her doctorate in higher education administration/community college leadership from The University of Texas at Austin. Dr. McRaven is also the state advocacy representative for the Bill and Melinda Gates Foundation. @accdistrict

Mayor Annise Parker is the president and CEO of Victory Fund and Victory Institute. She served six years as a Houston City Council member, six years as city controller, and six years as mayor of Houston. She was the first openly LGBTQ mayor of a major American city. In 2010 TIME magazine named Mayor Parker one of the 100 most influential people in the world. @AnniseParker

Parker Poling is a seasoned professional with 20 years of senior staff experience at the highest levels of Congress, the Executive Branch and political campaign organizations. From 2018 to 2020, Parker served as the executive director of the National Republican Congressional Committee, leading the NRCC to defy expectations, pick up 14 seats, and elect the most diverse class of Republican House members in history. She currently serves as a partner at Harbinger Strategies, advising clients on government relations and political strategy. @parkerpoling

Molly Quirk is a business development professional for Ardurra, a national engineering firm that specializes in governmental infrastructure. She also owns MPQ, LLC., a legislative consulting firm, and operates MollyQuirkPhotography. Previously, she spent 19 years serving in various leadership roles in and around the Texas Legislature. She is the mayor of San Leanna, sits on the Greater Black Chamber Fund Development Committee and on the board of directors for the Texas Lyceum. Molly is an alumna of The University of Texas at Austin. @mbq22

Dasheika Ruffin is the owner and principal of DMR Strategies LLC. As a seasoned political operative and civil rights attorney with over 20 years of campaign and advocacy experience, she has been at the forefront of some of our nation's most historic and consequential campaigns, such as Doug Jones for Senate, Ayanna Pressley for Congress, and Elizabeth Warren for President. Most recently, she served as senior advisor for Rev. Raphael Warnock's Senate campaign. Previously, she served as the Southern regional director for the American Civil Liberties Union (ACLU), where she focused on ending mass incarceration in the South and helped the organization secure two of its most historic victories that ushered the end of century long Jim-Crow era laws. Ruffin is a 2020 fellow of the Presidential Leaders Program. @dasheikaruffin

Jenifer Sarver, principal at Sarver Strategies, has more than two decades of experience in media relations, crisis communications, speechwriting, coalition building and media and presentation skills training. She ran for Congress in Texas in 2018 and was selected as a Presidential Leadership Scholar in 2017. She is a fellow of the inaugural class of the Civil Society Fellowship, a Partnership of ADL and The Aspen Institute, and a member of the Aspen Global Leadership Network. She was chief of staff to Ambassador Karen Hughes, deputy director of public affairs at the U.S. Department of Commerce, director of The Archer Center and served as a senior adviser to U.S. Sen. Kay Bailey Hutchison (R-TX). Sarver is an alumna of The University of Texas at Austin. @UTSarver

Doris Slay-Barber is Chairman of the Trustees for the Texas Business and Professional Women's Foundation. After over four decades as a public school educator, administrator and district coordinator, she continues to teach senior citizens technology at the San Antonio Senior Centers. Slay-Barber served over 10 years on the Board of Trustees for St. Mary's University and continues to serve on university board-level and advisory committees as a trustee emerita. St. Mary's University named her its distinguished alumna in 2017, recognizing her support for education, scholarship and lifelong learning. The lifelong goal of education for all, in all areas of learning, drives her service as president of the board for The Children's Ballet of San Antonio and as a trustee for the Constance Allen Heritage Guild for Lifetime Learning.

Amy Whited is the director of state government relations and public affairs at UCB, Inc., where she manages lobbying and government relations activities for the company across the southwestern United States. She is the founder of Pink Granite, a nonpartisan community of women supporting women working or aspiring to work in Texas politics and public policy. Pink Granite works to bring original educational content and nonpartisan networking opportunities to the women it serves. @amy_whited

Terri Broussard Williams is an award-winning lobbyist, philanthropist and professional speaker who has spent the past 20 years helping leaders and organizations create systemic change to further their mission. Broussard Williams serves on boards including the Association of Junior Leagues International, The University of Texas-Austin McCombs College of Business Community Capstone Advisory Board, The University of Texas-Austin Annette Strauss Institute for Civic Engagement and The Louisiana State University Diversity Advisory Board. She shares advice, tools and perspective on campaigns, lobbying and volunteerism at movementmakertribe. @TerriBWilliams

Amy Kroll (MPAff '20) is a Ben Barnes Fellow in Public Leadership and graduate of the LBJ School of Public Affairs at The University of Texas at Austin. Presidents Bill Clinton and George W. Bush selected her to join the 2020 class of Presidential Leadership Scholars. In 2019, she was selected by the European Parliament as one of 100 leaders worldwide to participate in the European Union's Visitors Program. Kroll is a political veteran, having worked nearly a decade in politics including U.S. Senate and congressional races (Sen. Claire McCaskill (D-MO) and Rep. Pete Gallego (T-TX)), the press office of Sen. Charles Schumer (D-NY), the National Democratic Institute (NDI), Texas Democratic Party, and the Democratic National Committee (DNC). Her passion for building a more diverse and representative democracy led her to found the LBJ Women's Campaign School in 2019. She is proud to serve on the inaugural Dean's Advisory Board of the Clinton School of Public Service, where she is continuing her work lifting up public service leaders in the South. Kroll graduated from Stanford as president of her class with a bachelor's degree in international relations and a minor in German. She is a military spouse and lives in Alexandria, Virginia with her husband, Louis, and their dog, Julian.